Serving features are for illustration purposes only - Part 2

Walked into a certain fast food outlet specialising in fried chicken to order lunch. The counter 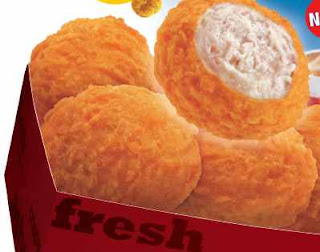 staff asked me if I'd try their latest promotion named Chicken Poopers (the typo is deliberate, you will soon know why...).

I looked at the promotional menu and found that Chicken Poopers are basically chicken balls the size of golf balls, or so I thought.

I said no thanks and proceeded to order my lunch. However just before I pay up, I thought "Hey, if they are the size of golf balls, they cannot be that bad right?" and ordered a serving.

When I got home, I took out the box which contains the chicken poopers. The box rattled. I open up the box only to find 5 miserable chicken balls the size of marbles, not golf balls. I think even my cat's testicles are bigger. This photo must have been taken with a macro lens during the photo shoot for the advertisement.

And true enough, the dreaded statement "Serving features are for illustration purposes only" are again in fine print in all their ads about this product.

Why oh why oh why will I never learn?
Blues posted by Wombat at 3:19 pm 14 comments:

The English Premier League is back

The EPL 2007-2008 season is now almost 2 weeks old, and surprisingly it is not that predictable so far.

For starters, last season's champion M*n U*d is now at position 16th in the league table after 3 matches instead of being in the top four. It is not everyday we can technically say that M*n U*d is trying to avoid the relegation zone.

Chelsea's cylinders are still sputtering due to injury problems and was lucky not to lose to Liverpool on Sunday no thanks to the match referee Rob Styles who committed daylight Rob-bery by awarding Chelsea a penalty resulting in a 1-1 drawn match.

Arsenal? Their goalkeeper has been inflicted with the dreaded butter fingers disease lately.

The breath of fresh air must have been Manchester City, winning 3 matches out of 3 so far and is topping the table. At least Sven G. Ericsson got something right finally, unlike during his job as England's manager.

Newcastle under Sam Allardyce is doing better while Bolton is having a terrible time in this new season after Big Sam left them. (Bolton chairman's note to self : Never bad mouth your ex-manager.) Newcastle slammed four goals past Bolton's goalkeeper on opening day.

As for the rest, nothing remarkable so far, but as the season progresses, things will change.

As for my team Liverpool, thanks to some very good buys in the transfer market which beefed up the team's striking power, this season may just be the season Liverpool will win the EPL title after 17 years.

This season is different. The team looked confident, decisive and took no prisoners in their 2 matches so far, and I foresee this to be the trend throughout the season.