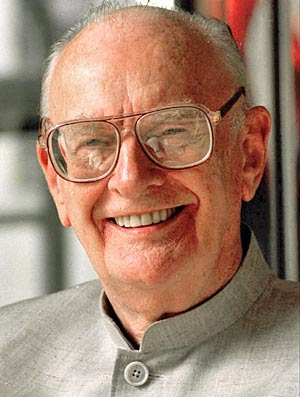 Sir Arthur C. Clarke (1917 - 2008)
I first started reading science fiction (Sci-Fi) when I was fifteen, and my first sci-fi author was the late Isaac Asimov and his first book I read was the "Foundation" series. It introduced me to the amazing world of sci-fi. I then moved on to the "Robots" series and his other works.

The second sci-fi author I read was Arthur C. Clarke and his book "2001 - A Space Odyssey". I even saw the movie version directed by the late Stanley Kubrick. I found the book and the movie real deep stuff and it took me quite some time to understand its real significance. Clarke then wrote three more sequels to "2001" and I read them all, along with his other works.

During the late '80s, my friend B.C. Yap further broadened my sci-fi horizons by introducing me to other sci-fi authors such as Fred Saberhagen and Larry Niven/Jerry Pournell, and also the Fantasy genre with authors like Anne McCaffrey and Piers Anthony and I bought Sci-Fi/Fantasy books by the truck loads.

I haven't bought a sci-fi novel for a while now as I am getting on in age and my taste in reading has moved on to other things such as "Ten ways to discipline your children effectively".

However, Arthur C. Clarke and Isaac Asimov will remain in my heart as the two greatest sci-fi writer ever lived, IMHO.

Asimov's works tend to be easier reading compared to Clarke's, and Asimov's effort in tying up the last chapter of the Foundation series to the Robots series is nothing short of genius. No spoilers here, you will have to read both series yourself if you don't already know the story but the ending is worth the wait. There are probably 10 to 12 books involved.

Clarke's works are deeper, in my view. The "2001" series was one, and then the "Rama" series plus many others.

Clarke also predicted the synchronously positioned satellite and worked out the mathematics for it. However he did not take out a patent for it, and the satellite industry is a multi billion dollar business today. All he got was a 15 dollars payment for writing the paper.

So now both my fave sci-fi authors are gone. There will never be writers like these two, me thinks. I thank them for filling me with awe and wonder during my growing-up phase and they still do whenever I re-read their books in my library.

1) I have not retired yet. When I was 24 I told myself I will retire at 40 and go fish for trout in Australia.

2) I am still not yet a politician so that I can plunder the state's money.

5) I still work for other people.

1) I am happy I am still in good health.

2) I have a wonderful wife and kids.

4) I am glad that I have a lot of friends both near and afar.

Life, is how you want it to be.

Now onto that half-century.

I am sure a lot of members of a certain political coalition woke up this morning saying "Did a freight train just ran over us?".

Yes, it was a freight train long time coming, it is just that these people were too blind to see it due to lots of reasons.

To the opposing forces I say congratulations, and I hope they can show the people how things can be done differently without resorting to immature concepts of the past. They have 5 years to do it, and if they screw up, they have only themselves to blame.

To the ruling forces I say it is time to wake up, take stock of your defeats and do what that needs to be done to make things right. You know what the people want. Politics of punishment will not work anymore, because if you try, in 5 years time the freight train will be even larger and you will be out of a job.

We are no longer lambs to the slaughter. Wake up now.