Haven't been tagged by anyone for a while and what did I get when I visit The Dude's blog? I have been tagged! Aaaaaaarrgh!

1. Name one person who made you laugh last night?
Ryan Seacrest with his "Dresses" jokes during American Idol Ladies Top-10 night.

2. What were you doing at 0800?
Having noodles and Nescafe black with two Equal tablets for breakfast.

3. What were you doing 30 minutes ago?
Looking through American Express' reward points redemption catalogue. I will be able to redeem that 42" LCD TV in the year 3008.

5. What was the last thing you said out loud?
"What the fark you call this? You call this work? My son can work better than you!"

6. How many beverages did you have today?
Nescafe black and a Pepsi at KFC. A Mr. Brown Jamaican Blue Mountain coffee at home.

7. What color is your hairbrush?
For obvious reason, I don't have one.

9. Where were you last night?
At home.

10. What color is your front door?
Mistral blue.

11. Where do you keep your change?
My coin pocket in my pants.

12. What’s the weather like today?
Warm and humid. I was hoping for a meteorite to hit.

14. What excites you?
Anything Mac/Apple. Lingerie. Liverpool matches.

17. Do you talk a lot?
I used to, but then I got cynical so nowadays I listen more.

21. Are you a jealous person?
Once, when a guy tried to hit on MrsW before we got married. I could have tore out his heart and ate it raw.

24. Who’s the first person on your received call list?
My daughter. She called from camp today.

25. What does the last text message you received say?
"Chuck Yaeger I know. The rest have to see face, then I know. Pity about Chuck though. He can sing but lacks charisma." from Rkaru.

27. Do you have curly hair?
My hair migrated south a longgggg time ago.

28. Where’s the next place you’re going to?
A coffee shop to listen to my informer about news of an impending Ewok rebellion.

29.Who’s the rudest person in your life?
Every single god damned driver that drive on the emergency lane while I am stuck in the morning traffic jam. I hope they all die soon.

30. What was the last thing you ate?
Two Colonel burgers. One Cheesy Wedges. One regular coleslaw.

31. Will you get married in the future?
Mrs Wombat : You just try.

32. What’s the best movie you’ve seen in the past 2 weeks?
Happy Feet. Honest!

34. When was the last time you did the dishes?
I don't do dishes. I got married and also have a daughter for a reason.

35. Are you currently depressed?
Yes, because my candidate for the state assembly seat of Gum Gum withdrew from the general election at the last minute. He claimed he does not have his father's blessings to run. I say check his lifestyle for drastic changes over the next 6 months. Now I don't even have a chance to vote. Traitor!

37. Why did you answer and post this?
I haven't done a tagged posting for a long time.

Last night was the turn of the ladies to show their stuff on American Idol Top-10.
Honestly the last 12 of this season's female singers did not impress me much but after last night, I have found two or three to cheer for.

First up is the Irish rock chick, Carly Smithson. From the day she auditioned for A-Idol, I knew she can sing. Rumour has it that Carly has actually signed for a major label before and recorded an album which bombed.

She's very good with songs by Heart, and last night's "Crazy For You" was very good. Problem is she cannot go on relying on Heart to pull her through. I wonder how she will do when the theme is disco.

Next is Brooke White. Earlier I said she looked like a Julia Roberts wannabe but last night she chose the perfect song to sing : Carly Simon's "You're So Vain". It suited her voice and Simon probably think the song is about him too. 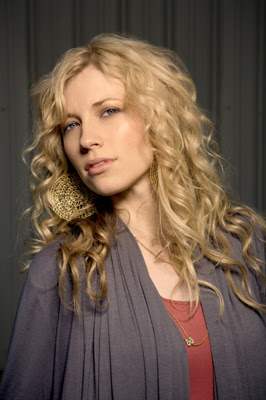 Finally there's Ramiele Malubay. MrsW perked up her ears when she heard Ramiele said something in Tagalog. She asked me if Ramiele is Filipino. I said well she looks like one, sounds like one, so must be one. Ramiele sang Thelma Houston "Don't Leave Me This Way". Not bad, but she could have bettered it with more movement and more oomph in her voice. It is a song that deserves to be sing out loud. I heard Anita Sarawak sang it in the 1970s, and man, did she make it funky. I would like to believe she sang it better than Thelma Houston. 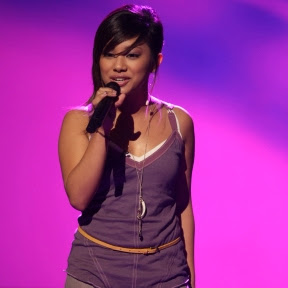 As with a lot of Filipina ladies, Ramiele has a very good voice. The only thing she needs now is to make sure she choose the right song week after week.

There you have it, my three ladies to cheer for this season plus Michael Johns and David Archuleta for the guys.

Now who screwed up big time last night? Amanda Overmyer. If there's one song you don't ever sing on A-Idol, it's Kansas' "Carry On Wayward Son". Yes it is a 70s rock song but it has too much instrumental breaks. Not a song to win votes. Kansas' "Play The Game Tonight" or "Crossfire" would have suited Amanda better, but too bad they were 80s songs.
Blues posted by Wombat at 3:03 pm No comments:

Yes, American Idol is back, and is in its seventh season.
This season's finalists appear to be the most talented bunch by far, and there're no jokes like Shanjaya et. al. of seasons' past.

Last night was the men's Top-10 (70s Night) and already I have found my pet hates and potential talents to root for.

For talent, first up is Michael Johns. When this guy sang Bohemian Rhapsody during Hollywood week, my ears perked up and I said "I think I have found Constantin Murales No.2". Michael has a good voice, and his performance of "Light My Fire" last week showed he has the right stuff. However he can be weak in song selection as in last night's "Go your own way", a Fleetwood Mac classic. The vocal did not suit him. He later commented that he has always wanted to sing a Fleetwood Mac song on live TV, that's why he sang that. 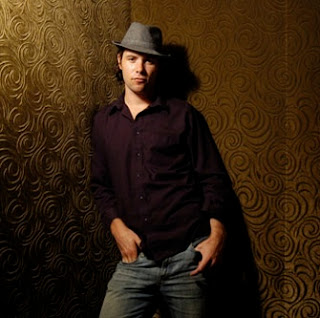 Hasn't everyone learnt by now that at this stage of the competition you don't go and sing songs that you've always wanted to sing or your grandmother wanted you to sing, because you can get voted out if you end up screwing the song. You don't hear me sing Unchained Melody in karaokes, even though I have always wanted to sing it in public. If Michael is more careful with his song choices, he will go far.

Next, my Shanjaya for this season : Danny Noriega. I have developed a dislike for him because of what he did last week when he sang Elvis' "Jail House Rock" and Simon Cowell panned him as grotesque. He talked back like a smart-alec which is a no-no on this show, no matter how wrong one may think Simon's comments may be. Anyway, his Elvis performance is badddd and last night's "Superstar" was no better. He killed himself by trying too hard with all the vibrato effects and forgot to sing naturally. 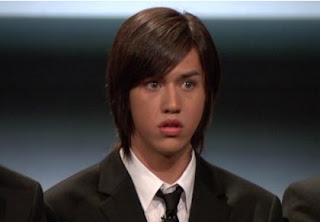 And Danny has a very irritating obnoxious expression, which can turn a lot of people off. His talent is so so, so I expect him to last maybe a week more. My buddy Rkaru said it best in an sms : "Danny will be real popular in any prison." Go figure.

A rocker, David Cook, who played the guitar last night, sang Free's "All right now" and was quite good really, until he cut Simon off during Simon's comments by saying something that it is not Simon's vote that he needed but the viewers'. When I heard this I told the missus "This guy is dead. He should not have said that, and especially not by cutting the judge off mid sentence." 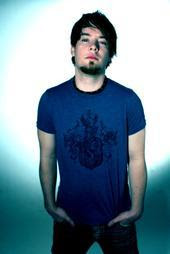 Yes, David Cook may not need Simon's vote, but Simon can weaken one's prospects by a few well placed scathing remarks. For David's information, no A-Idol contestant has ever went to the Finale by pissing Simon Cowell off and by being extremely smart-alec and obnoxious. Not a single one.

Which brings us to David Archuleta.

My bro Rkaru saw his performance during the live show earlier and sms-ed me to say that this is not to be missed. When David came on, and sang John Lennon's "Imagine", my jaw dropped onto the floor. This kid is only 17, man, and his voice defies belief! HE IS GOOD. 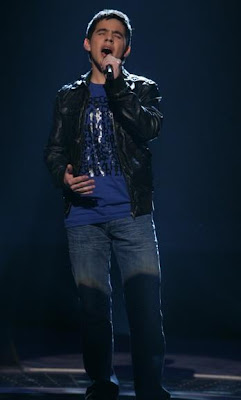 The judges went gaga, including Simon. David Archuleta will go very very far this season, and I dare even predict the Finale.

Best of all, David is neither smart-alec nor obnoxious, and has humility by the truck loads.

Okay, Chinese New Year is officially over. I put on 5 kilograms over 2 weeks, and now I need to lose 15 kilos in order to go down to 90 kilograms, and that is still 10 kilos over my ideal weight of 80 kgs.

It's good to see Liverpool came back from the humiliation inflicted on them by Barnsley in the FA Cup and went on to thrash Inter Milan 2-0, so the return leg in Milan will be almost a formality.

It is also good to see Fernando Torres score his first ever hat trick for Liverpool against Middlesbrough at Anfield. This guy HAS the talent, period. He has pace, he can outrun defenders and most off all, he keeps his head whenever he has the ball. It is almost a given that whenever Torres gets the ball, I can feel something beautiful may happen.

My cardiologist took me off Frusemide (a diuretic) last week so now I am officially not a drug cheat at sports. For the uninitiated, diuretics are often used to flush steroids from one's body to avoid detection and also to lose weight fast. It induces one to urinate often.

The General Election is here again. Those who know me well will know where I stand in the scheme of things. I don't hope for drastic changes. I just want the powers that be to lose the ability to treat this country's constitution like a piece of toilet paper.

Came across this skit on YouTube recently. It's one of the better ones I have seen so far. Turn up your volume.