I finally got tired of carrying two cellphones everyday.
Two phones? Yes, one for business calls (an SE-S500i) and one for personal calls/SMSs (SE-K800i). I do a lot of personal SMSs, close to about 1000 a month and I don't think my boss will appreciate that if I do it on company account. Morever, I finally has finished with my phase of playing with the latest cell phones. 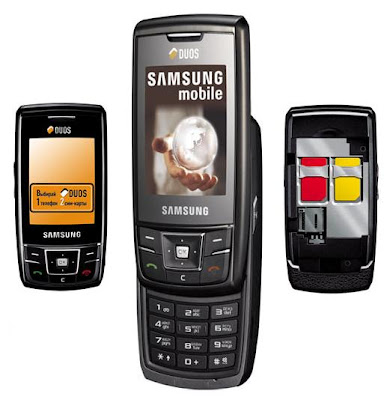 So I went and bought a Samsung SGH-D880 DuoS. It is the only cellphone currently available that can hold two SIM cards. Yes I know you can buy such dual SIM phones in China but I just couldn't see myself using a phone with a brand name like "Bird" or "Red Flower".
Basically the D880 can hold two SIM cards thus enabling me to make/receive calls and SMSs on either of the two phone numbers, without having to swap SIM cards manually. Switching SIM cards involves pressing a button on the side of the phone and there is no need to reboot the phone to the sim card you wanted. I discovered this undocumented feature tonight after reading some reviews of the D880 on the 'Net. You only need to reboot if you want to specify which sim card to be the primary line. I am not surprised about this undocumented feature because the Samsung phone manual that came with the phone is hopelessly small and thin.
The phone is a slider and has a large screen which is very handy for browsing the 'Net. It is not a 3G phone (up to 2.5G) but has most of the features commonly found in phones today except for wifi and infrared.
The menu system is almost the same as Sony-Ericsson's but require a bit of retraining. Sound is okay but will never be able to beat SE's. The only beef I have is that the four preset midi SMS alert tones cannot be replaced at all.
The T9 predictive text input is not as good as SE's but miles better as Motorola's crap T9 system.
I have been using this phone for the past two weeks and so far I would say I am happy with it. I just need a phone to make calls and do SMSs. I don't need it to play music, make a epic movie, tell me where I am on planet Earth or cook me fish and chips.
I think the D880 will suit me just fine. For now.
Until Apple releases the next new model of the iPhone.
Blues posted by Wombat at 9:34 pm

iPhone with 3G, very soon will make you jealous...

I'm contemplating to buy an iPhone (well, my partner is offering to pay la.. hahaha) but I think I'll wait till the next model come out lah! :D

D880 that good? I'm looking to buy a new phone too. My current one a bit rosak already.. Keypad gets stuck every now and then..*sigh*

Ah, the marvels of modern technology. Whatever happened to pencil, paper and the postage stamp? :-)