The Greatest Team In The What??? 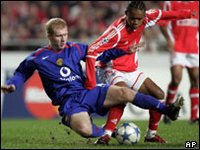 I remember sometime ago someone here posted something about MoanU being the greatest team in the world.

Well, since we all know that the scoreline is now Benfica 2 - MoanU 1, and no more Champions League and not even the miserable UEFA Cup, nah... not nice to gloat too much lah.

So, now I hope it is Chelski's turn to trip up and get dumped out. Hope they get to meet Barca in the knockout stage draw. Hell, they cannot even win against Reds (and they did not) at Stamford Bridge without having some third rate player blatantly plant his boot right into people's knee cap. How to earn respect like that? Oh shut up and have some humility for a change, Jose.

Lets hope Paul Jewell pull it all together and have Wigan sock a last gasp goal into Chelski's net this Saturday. But then Jose will still say that Chelski doesn't lose matches. It is just that the other team scores more goals. Oh shut up again, Jose.

And to that certain 2004-2005 EPL fourth placed team that dared to even contemplate the thought that they in their wildest dream deserved a place in the Champions League, perhaps their manager can take up male modelling. He looked the part. And what's that you are saying, Everton? You have to speak up because you are wayyyyyyyyyyyyyyy too far down the table to be heard. 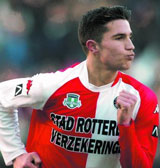