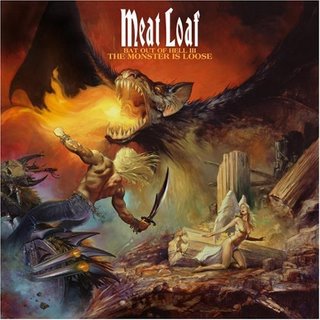 The third album of the Bat Out Of Hell series, my expectations were rather high even before I first heard it. But after I ran it through the hifi once, my first reaction was : "Huh?"

"Huh?" in a sense of saying "Is that it?". What do you expect? BOOH-3 is no longer a 100% Jim Steinmann work, unlike the previous Bat albums. Produced by Desmond Child, it featured 14 tracks, 7 of which are songs written by Steinmann long ago, but covered by Meat Loaf on Bat 3. The other 7 tracks are written Desmond Child, Nikki Sixx, John 5, James Michael, Diane Warren et al.

As such, the whole album does sound disjointed because Steinmann is no longer there to thread everything together.

Also, it sounded as if Desmond Child told everybody that "we are going to write seven songs that sound and feel like Jim Steinman's songs". Well, some did turn out ok, but some fall flat on their butts.

The Monster Is Loose
This is the title track written by Desmond Child/Nikki Sixx/John 5, so naturally I will compare it to "Bat Out Of Hell" on the first album and "Back Into Hell" on the second album. A lot of people raved about this title track, but not me. Meat Loaf sounded as if he is trying to please the music rather than having the music support him. And nu-metal? Not in a million years. Even the synthetic "Back Into Hell" is miles ahead. And worse, the song starts to gnaw at my ears with each listening.

Blind As A Bat
Written By James Michael/Desmond Child, I did not give this track any hope when I first heard it but after a few runs, I find that it grew on me. If these guys want to imitate Steinmann, I would say they achieve it best with Blind As A Bat. It has the makings of a classic. If Meat wants some more loose change, he should release this as the second single.

It's All Coming Back To Me Now
The first Steinman song on this album. A lot of people said this is the best track off BOOH-3. The problem is that if this song was released for the first time today, I will agree. But Celine Dion sang it 10 years ago, and one will always compare it to Celine's version which I find to be more powerful because she sang it solo and imparted a sense of lost. Marion Raven's part of this duet is interesting at first but tell me what you feel after listening to it 10 times. It gets irritatting.

Bad For Good
Bad For Good was written by Steinman 25 years ago and was supposed to be on some other projects but ended up here. Add to it Brian May's guitar, vintage Steinman 30 words per sentence lyrics and oh-those-backup-vocals and I am in nirvana. Best of the seven Steinman tracks.

Cry Over Me
Written by Diane Warren. Why the hell is this song on the album? Meat Loaf ran out of fillers?

In The Land Of The Pig, The Butcher Is King
An operatic Steinman track. Too bad this song got butchered by trying too hard. This song actually reminded me of John Williams' "Phantom Of The Paradise" album which is a satire of operatic rock, and John Williams did it better.

Monstro/Alive
Montro is a short instrumental by D. Child/Holly Knight/Elena Casals while Alive is by D. Child/James Michael et al. Written and sounded in the vein of Blind As A Bat, it came as pick-me-up after the horrors of Cry Over Me. Not bad at all.

If God Could Talk
Marti Frederiksen and D. Child penned this one. Another pointless filler track.

If It Ain't Broke Break It
Steinman's "Live Is A Lemon And I Want My Money Back" revisited, with the volume pumped up a wee bit more. Lemon is better.

Seize The Night
The problem with Seize The Night is that despite being a Steinman song and long in length, it was not written specifically for BOOH-3. Thus the essence of BOOH-3 is simply not there (BOOH-3 got essence?????). In fact there's strains of Back Into Hell guitar riffs in it, which made it worse. And that kids choir: What on Earth is it doing there? A few more listen and my ears will beg my intestines to seize my throat and kill me for subjecting them to this cruelty.

The Future Ain't What It Used To Be
A Steinman track, and featuring Jennifer Hudson. Meat is getting lucky tonight. Imagine that, folks. Urgh.

Cry To Heaven
An obvious attempt to do a "Heaven Can Wait" (BOOH-1) or "Lost Boys And Golden Girls" (BOOH-2). Forget it Meat. God can't hear you.

So there it is, my take on Bat Out Of Hell-3. I am no Rolling Stone magazine reviewer, so don't take my head off if I got things wrong.

I feel that Meat Loaf should not have done BOOH-3 without Steinman as writer/producer. They should have patched up their differences, fire all their lawyers, and sit down and record BOOH-3 together. They would have ended up with a Bat album worthy of the name instead of this mishmash of an album.

The only good thing Desmond Child did for Meat Loaf on this album is that he got Meat Loaf's vocals improved and Meat Loaf actually sounded better on this album than any of his previous works. In fact it was written somewhere that Desmond actually sent him for vocal training. Too bad Meat Loaf did not have the song material to really show off his much improved voice.

Now I have to wait another 10 years for Bat-4 (Yes yes I know, they say no Bat-4 and all that but then they once swore there will be no Bat-3 either). By 2016 Meat Loaf will be 59 years old. Does he still have the lungs to scream 30 words per sentence?

A disappointment, ain't it? I've deleted all the tunes from that album already.

Gallivanter : At least you can delete the mp3s. What am I going to do? Turn the CD into a coaster? :-)

LOL! You could always auction it off, just need to find a sucker. :-)

Rkaru : No ler. Where I will sell? USA copy somemore man. It will go into my CD collection, along with some immortal works by a famous group called "Fishball".

ouch that's a little harsh. i admit that while my fav is still Bat-2, and cryoverme and the pigbutcher are horrendous songs, but i found out that if you put all 3 bats together, the whole story does unfold nicely.

rock opera is supposed to be appreciated in retrospect to each other. i agree with you when you say that bat-3 is pretty weak on its own. it does nevertheless, continue the story of the metal knight (wasted youth).

omg...
are you a die hard meat loaf fan or what?
I am not a Fan, but think from the musical point of view this is one of his better releases.

It's almost impossible to surprise like he did so many years ago with his comeback, but we all have to admit, that ML became old and the best times of his voice are way back in the 80s and now...

however I just think this is a typical harsh review and is too personnel to sound professional at all.

At least every word you wrote is an evidence for your very good musical education.

Anonymous : Well, each to his own opinion. Afterall, this is not meant to be a proffesional review of the album. It is just my personal opinion. Some may prefer Bat-3 while others prefer Bat-1 and 2. In my case, I just thought that Bat-2 is better.

I surprised you said ML's voice is better on Bat-2. I thought his voice is more controlled and powerful on Bat-3 because he actually took voice training before recording it.

After living with Bat-3 for almost 3 months, it grew a bit on me and I ended up liking 7 songs only. The rest I skipped.

Good musical education? Nah, I'd say I had a good musical experience throughout my life. I listened to a very wide range of music and pick things up here and there.

Meat Loaf's fans from around the world will love his new album, no matter what.

If you really want to do Meat a favor, start a petition for him to be inducted in the Rock and Roll Hall of Fame. One never knows when he will leave this Earth, so get crackin'!

I have enjoyed Cry Baby Cry, It's All Coming Back to Me Now, and Seize the Night so far. Just listened to the new album a few times.

Meat's a great guy, so it pains me to read so many negatives that you have written about him and his new album!