Thanks Shane Warne, you have a good 'un too. 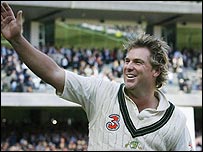 Shane Warne, considered to be one of cricket's greatest leg spin bowler, captured his 700th wicket in the Fourth Test against England at Melbourne's MCG this week, and became the highest wicket taker in Test Cricket.

Prior to this, he announced his intention to retire after the Fifth Test in Sydney in January, having represented Australia for more than a decade. And what can be more fitting for a farewell present by taking his 700th wicket in front of his home crowd at the MCG and have Australia win the Fourth Test by an innings?

Cricket. Strange and boring game, some may say. I thought so too, when I first arrived in Melbourne in 1982. Thirteen men playing an extremely boring version of baseball on an grass oval. Probably more exciting to watch the grass grow, I thought.

But as I learn the game, and follow the matches, my appreciation of cricket grew, and realise it is not an easy game. I even played it in the suburbrs' ovals among friends (I batted at number 10, and I can't even bowl a decent staright ball).

During the 80s, the West Indies was THE team to watch. Vivian Richards and company strike fear into all the other teams when ever they play. Hardly a match they cannot win.

During this time, the Australians were in decline. Great bowlers such as Dennis Lillee and Jeff Thompson from the 70s are retiring. Batsmen such as Greg Chappel are in the twilight of his career. Australia's performance during the 80s was like a yoyo, sometimes up and sometimes down. Despite all that, there's one batsman by the name of Allan Border who batted at number 5 or 6 who will captain the team into the 90s and revive the glory days of Australian cricket.

From the 90s to the present, Australia is THE team. I will not present the stats here but you can drag them out from Wikipedia or something. (http://en.wikipedia.org/wiki/Australian_cricket_team)
The only down side is when they lost the Ashes back to England in 2005.

With the retirement of Shane Warne and Glen McGrath next month, Australia may be entering a period of uncertainty. Other players are also in the twilight of their careers e.g. Mathew Hayden and the years 2008 and 2009 will be an interesting period in Australian cricket.

So who do I consider to be the greatest cricketer of them all? The late Sir Donald Bradman. I did not have the opportunity to watch him play as he was before my time, but I have devoured books on him and his lifetime stats speak for himself.
Blues posted by Wombat at 2:11 pm

Wasn't he involved in some sort of controversy some years back? Can't remember what though.

Yeah... I'm one of those who doesn't understand cricket. We had a pitch in my school and I used to watch trying to figure out the game. But I got turned off because at that time, cricket along with tennis was a 'rich kids' game'. And the kids playing the were a bit snobbish. So I turned to rugger. Or rugby as it is more popularly known.

But I don't find cricket boring. It is still a competitive sport. Bodybuilding on the other hand... I'd rather watch grass grow.

There was two cases. One, he is alleged to have given some cricket info to the team from another country and was exposed and penalised. Second case was he fooled around too much with women and got divorced. The funny thing is he and the ex-wife is still living in the same house (probably not the same room) for the sake of the children or something like that.

Now as for body building, I am still waiting for the day one of those blood vessels will pop live on TV.