For some strange reason Liverpool dug themselves a very deep hole in the group stage this season, thus requiring them to win the remaining three group matches to have any hope of progressing to the Final-16 knock-out stage, where the big money is. 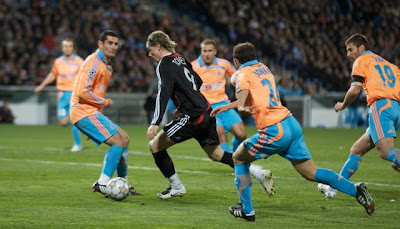 Liverpool is through to the last sixteen a.k.a. knock-out stage, for the fourth year in a row.

I mean, one look at the starting XI is enough to tell me Reds will be in for a goal fest, despite playing on Marseille's homeground. With a starting XI consisting of Torres, Kuyt, Kewell, Gerrard, Mascherano, Benayoun, Riise, Carragher, Hyypia, Arbeloa, Reina, everything is possible. Best of all, there's no sign of Momo Sisoko, Voronin or Crouch. 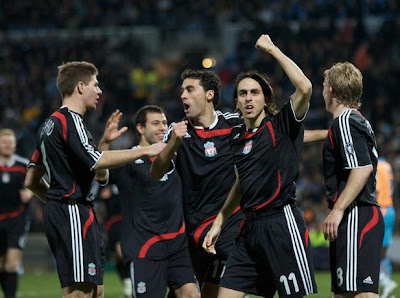 This Sunday Liverpool will face Manchester United at Anfield in the English Premier League and then Chelsea in the League Cup a few days later. If manager Rafa maintains this team and stop playing his rotation Russian roulette, victory against M*n U*d is not only possible but assured. And we will not have to dive to get goals, unlike a certain number 7 on a certain team.

Then we will have Chelsea for dessert later.

I like that Chelsea be our dessert. That would be nice. I just can't wait to have MU as dinner though. I have nothing against them to be honest. It is just sometimes Rafa being the unpredictable, coming with a point I already satisfied. I just hate Liverpool when they lose to lower rank..
Whatever the outcome, i will never leave them walking alone :D

And bro... did you know when your last sms came in informing me of the Babel goal, I was actually at the back of the hearse, alone, accompanying my SIL on her last journey? And I actually forwarded it to my Reds BIL and nephew in cars following us. Are we mad or what?

Kak, please do forgive me for that moment of disrespect.

Papajoneh : We lost to Reading because Rafa for whatever idiotic reason, pick the wrong team. Voronin and Crouch as wingers? Momo Sisoko who cannot hang on to the ball for more than 3 seconds? Jack Hobbs as centerback? Of course we will lose.

Rkaru : Don't worry, if SIL was a Kopite, she will understand.