I waited 2 weeks for this match. I was so sure that this time Liverpool will beat Manchester United at Anfield. The time is now--- not! 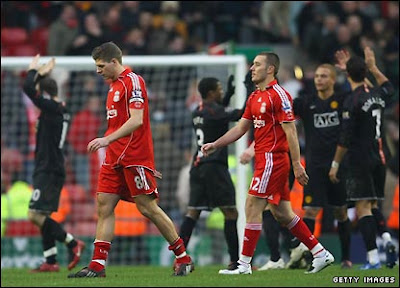 Well, at least this time I can live with the lost--- almost. Both teams played their hearts out, though I felt that Man Utd came to Anfield just to get a 1-0 win, or worse, a draw. So they packed the midfield and the defense. For the final 20 minutes, they parked the bus.

The referee did a good job, and was fair with his decisions, unlike the one in that Reading match.

There was no diving or blatant attempt to cheat, well, almost. That little twit in the number 7 MU shirt did try to dive in the fifteenth minute but the referee did not buy it.

Liverpool fielded the exact same team that demolished Marseile last week, and the understanding between the players grew as a result. No more of those frustrating missed opportunities just because players cannot read each other thoughts. If Rafa field this team again in that League Cup match tomorrow night, we may just have Chelsea for supper. (Hey, I lost my dinner, so no more dessert!)

As for Man Utd, we will meet again, in the League Cup, FA Cup, Champions League and EPL return match at Old Trafford. Plenty of opportunity for revenge. That is, if you don't get knocked out by other teams first!

So sad, Liverpool lost to Chelsea as well. Haha.. Man U 4ever!

It is just bad luck Thats all to it. There are great with others but not really when with us. Just pure luck. We still the best with Torres. We will catch up.

Whatever happen, Liverpool still the best team for me. I am glad you're with me too Wombat. Ignore the rest.

At least I don't go to others' blog and condemn their team. Unlike others... cisss.