It was the English FA Cup Fourth Round tie.
In the red corner is Liverpool, currently at fifth place in the English Premier League. In the blue corner is Havant & Waterlooville, a non-league team consisting of part-time players such as school caretakers, plumbers and gas engineers, 122 places and six divisions beneath Liverpool in the world of English soccer.

The match will be played at Liverpool's home ground Anfield. Everyone predicted a whitewash/bloodbath/nuclear-annihilation. What can go wrong?

None, unless Liverpool's manager Mr. Rafa "I have a case of the clevers again" Benetez then proceed to take out the back bone of the Liverpool team by leaving Torres-Gerrard-Carragher on the substitutes bench. When I saw the team list before the match I already have a bad case of the jitters. This is baddddddd karma, I told my pal Rkaru by text message, and I even said that if Liverpool ever loses this match because Rafa fielded a badly selected team, I swear I will support Manchester United from now on. 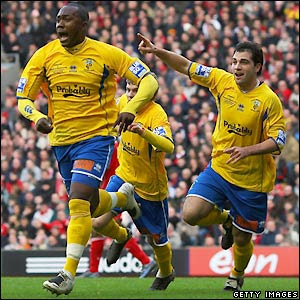 True enough, Havant scored in the 9th minute and I was busy picking up my jaw off the floor. An incomprehensible clearance by Liverpool's newly signed center back Skrtel resulted in a Havant corner and that resulted in a goal. Havant's 6000 supporters went wild.

Lucas equalized for Liverpool later and I breathed a sigh of relief, but not for long. Again Reds defenses sprung a leak and Havant scored again to lead 2-1 from a deflection off Skrtel. By now I was yelling for this guy to be taken off the field!

By the end of the first half the score is tied 2-2 after Benayoun realised that he has to start earning his salary by playing proper football for once. 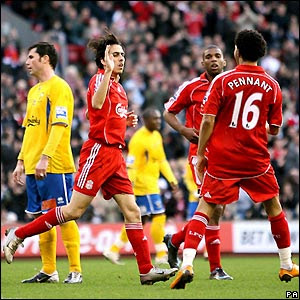 In the second half, Liverpool started playing like proper footballers and not a bunch of school kids. I guess Rafa really gave their butts a real chewing during the half time talk. The match ended 5-2 in Reds' favour. The introduction of Gerrard in the 85th minute resulted in the fifth goal scored by Crouch. Gerrard should have came on much earlier.

A 5-2 scoreline is no big deal. In fact it was an embarrassment. I expected 12-0. It was fortunate that H&W has not mastered the art of parking the bus (i.e. defend your goal with 11 men after leading the match) otherwise Liverpool would have been out of the FA Cup.

Look, if you are H&W, you know you are going to lose the match anyway, so your game plan would be to attack, attack, attack. Get one or two goals in so that at least the H&W player can someday tell his grandchildren that he once scored a goal at Fortress Anfield. That's all they want to do. Score against Liverpool. It was supposed to be Liverpool's job not to let this happen because every H&W goal will be an embarrassment. Somehow Rafa missed the plot, and caused me a lot of grief for more than 50 minutes. 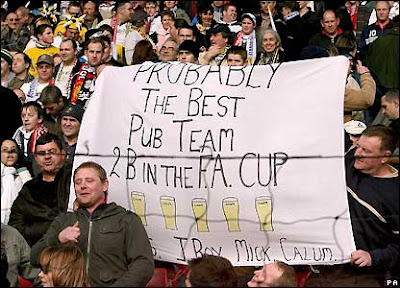 Havant & Waterlooville, I salute you for daring to dream.

I dunno about soccer, but I almost had a heart attack on the tennis sport. Damn it, Tsonga loses to that "Mila Jovovich" guy. Uwaaaaa!!

Too bad. I was rooting for the Joker. Tsonga lost because of his nerves, but he will be better next time.