I was in a traffic jam the other day behind a police van. When I looked at the stickers on the police van's rear windscreen, I almost laughed my head off after reading the message depicted by the Chinese characters in the top sticker. 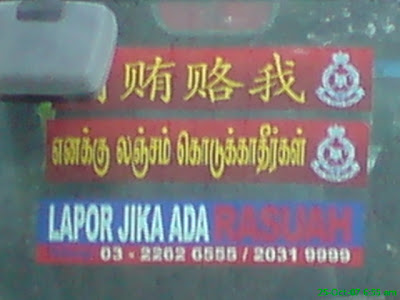 The message in these three stickers are supposed to be saying "Don't bribe me" in three languages (Mandarin, Tamil and Malay), which is very normal for a police vehicle. The problem is, they did not realize that somehow the rear mirror has covered up the chinese character "Don't" so the message now reads as "Bribe Me".

I would like to think that this is an honest error when the stickers are pasted onto the windscreen, but somehow I have a feeling someone in an auto accessory shop is playing a very clever prank on the cops.