Best Olympic Opening Ceremony ever....... NOT!

Two years ago when the missus and I were in Guilin China, we attended a stage performance called "Dreamlike Lijiang" which is a ballet-circus performance. I was very impressed by the way they used the effects of light, sound and LCD projections in the show which gave us all a very big Wow-effect. I remember telling MrsW that multiply this by a thousand times and we can imagine what is in store at the Beijing 2008 Olympic Opening Ceremony.
Fast forward to 8-8-2008... Beijing Olympics Opening Ceremony.
The 2008 drummers doing the countdown in the dark was really cool and spectacular. So is the subsequent performances and the fireworks display. The use of huge number of performers and the high tech tools used in the cinematic projections and sound achieved the desired wow-effect.
The lighting of the Olympic cauldron is not bad. Note that I say not bad. There is no uncertainty to rival the Flaming Arrow of Barcelona '92 thus it can never be the best flame lighting ever. It was all done with wires ala Crouching Tiger Hidden Dragon style. I was quite impressed, probably due to the emotional effect of the music during Li Ning's final "run" around the stadium's rim while suspended on wires. 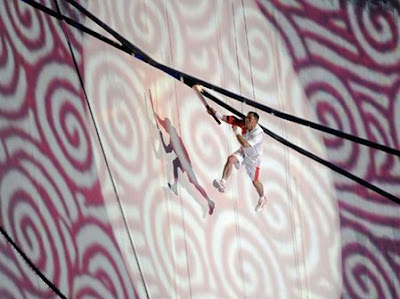 Second best of all time, I rated it. Sydney 2000's flame lighting could have won second place outright if not for the 10 minute glitch when the "flying saucer" cauldron refused to travel upwards after Cathy Freemen lighted it. 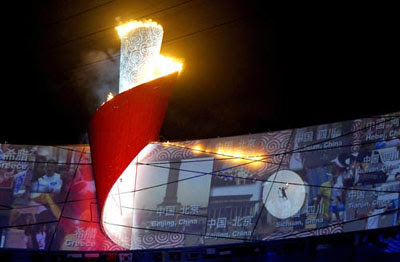 Overall a very good opening ceremony, I told myself that night.
Until yesterday.
Read on the 'Net that the 29 Foot Prints fireworks we all saw on live TV during the opening ceremony is not really live after all. What we all saw was a 55 second long animated fireworks video inserted into the live TV feed showing the 29 foot prints walking from Tiananmen Square to the Bird nest stadium. The reason given was that it is not possible to film all the 29 fireworks explosions from the air in a helicopter due to safety reasons, thus they spent a year creating this animation of the same. The fireworks did happen that night. It is just that what we saw on TV was not the real thing. Hell, they could have filmed it from the ground. You are telling me China cannot afford 29 TV transmission trucks? 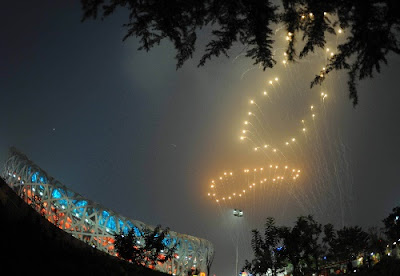 Ok, maybe, just maybe I can live with that. I was real impressed by what I saw on TV and when the news came out I was disappointed but I can live with it because it did happen. It is just a technicality.
Until this morning.
My good friend Rkaru text me that the little girl in the red dress who sang on stage when China's flag was brought in did not really sing the song. She lip-synced. Fine, I said. Maybe her voice is too weak to be heard in such a big stadium. Then he told me she did a Milli Vanili on us. Even the voice that we heard that night was not hers. Another girl sang it but she was not allowed to appear that night because she has crooked teeth!
What the hell? 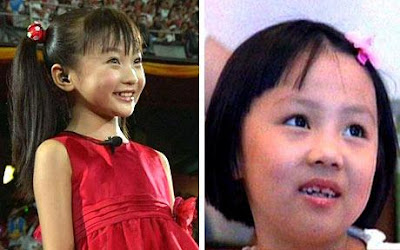 Worse still, the opening ceremony music director actually said this : "It was for the national interest. The child on camera should be flawless in image, internal feelings and expression."
Hello? I remember a certain country in Europe used to think like that too in the late 30s and early 40s. Does Nazi Germany ring any bells?
It is wrong! Absolutely morally wrong to do it that way. But then the organizers don't see it the way I did. They probably felt it is nothing wrong to fake a bit in their search for a perfect opening ceremony. To them I say they still have a lot to learn.
This Milli Vanili thingy left a bad taste. So what else is faked? Maybe there were no 2008 drummers? Maybe there was only 208, the rest were animations? Maybe their president who opened the Games is faked too? Athens 2004 was not really spectacular but at least there's no scams like these.
I don't know. I will still watch the Games, if only for the sporting performances. As for the closing ceremony, maybe I will watch it, maybe I won't. But if I do, a doubt will always exist in my mind : okay, is this part faked?
China, you have ruined my Olympic experience.
Blues posted by Wombat at 12:58 pm

Animated? So this is what they mean by censorship? Disappointed. I mean China man... they are good at grand scale stuff.

I don't find anything wrong with the Beijing 2008 opening ceremony. By world standard, it was magnificent enough. Even with some fake this and that, I don't think one can deny that they really did an impressive opening in world standard. At least the china man knows how to manipulate the new multimedia technology rather stuck to the old boring way of Olympic opening.

Dude, this is what we known as entertainment business. Even the westerners agreed with low cost and big huge impact. Fireworks not cheap and once you do a mistake, there is no return. I believe the 3D animation was acceptable because I think they did lots of thinking and creative thinking.

About the little girl performance, it is too bad that it has to be like this. Thou, I’m not surprised and happen almost everywhere. Now we saw lots of good looking singer that sang so badly and get famous and not good looking sang so well. This is the norm of our society now. We people tend to like appearance rather than the talent. It not just restricted in entertainment business but in some big company too.

I saw lots of creative thing in this opening ceremony especially the flag pole with blower. Isn’t it new? hehe.. Where you can find many people hanging on a rope doing acrobatic performance floating at the roof of a huge stadium? It looks like a circus show that never going to happen again unless Manchester tried to do the same thing without bankrupt their piggy bank.

China really did well in organizing the event and I hope nothing bad happen during this time due to the unsatisfying some people on the political issue that hovering during this games.

I agree about the flag pole bit. No one all these years has thought of having built-in blower at the top portion of the flag pole to make the flags flutter instead of limping like in the past.

For this I salute them for their ingenuity.

the little girl's voice was someone else's ????
oh noooooooooooooooooooooooooo
I was fooled thinking that they record it earlier.
Pity the girl who was discriminated. Reminds me of the Korean movie - 200 pound beauty

We all have "dreams" of some sort. 'Will i win the lottery', 'will my local soccer team win the cup', 'will the local council fix the roads'.

Beijing (temporarily) has achieved theirs.

Life moves on, somehow, i guess ..

(whether we like it or not, ultimately you and I are responsible for our own destiny.]

Sydney 2000's flame lighting could have won second place outright if not for the 10 minute glitch when the "flying saucer" cauldron refused to travel upwards after Cathy Freemen lighted it. heh.

Ah well, if everything was perfect, would we not become bored?

Ladies and gentlemen. Today, we can finally witness what five thousand years of civilisation has taught them - deception, discrimination and dishonesty. What's next? Winning ala Carl Lewis style?

Doc : I strongly suspect some of China's women artistic gymnasts are younger than 16 years old (the minimum requirement). So what if their passport proved that they are 16? They are China's gymnasts right? Who issued the passports? China right? Hell, they can even field a 10 year old and claim she is 16.

There are hundreds if not thousands of websites questioning their age as of now, with a certain evidence. Last year they were 13, this year 16. >_<

Sir Wombat, may you rest in peace. It's truly a sad news to hear about your passing. My thoughts and prayers are with your family.

Thank you for being a part of this blogger's life over the years.