Serving features are for illustration purposes only 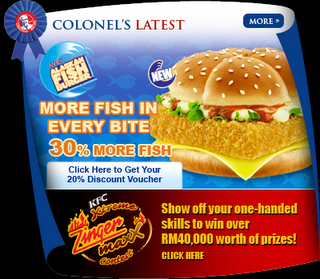 False advertising at its best? In the TV advert, the guy has to use both his hands to hold the burger. In real life, I can hold it with one hand.

Of course KFC will have their usual disclaimer to get around this "Advertise them larger than life" trick in the TV advert. I caught it in the last scene as the advert ends. It's a 0.5 seconds shot of the line that says "Serving features is for illustration purposes only".

I have to actually record this scene in order to catch the disclaimer.

KFC claimed that it has 30% more fish than compared to their nearest competitor. To me, it felt more like a 30% smaller burger than what was shown on TV.

And how it tasted? The so called red tangy sauce that looked like menstrual blood tasted like crap. At least they still got mayo on it.

When I enquire why they left out the mayo they said they cannot put in mayo alone because the dispensing pump is set up to dispense both sauce at the same time. When I ask them then why they can put mayo alone in their Colonel burgers they sort of looked at me very dazed.

Conclusion? Give me Filet O' Fish anyday.
Blues posted by Wombat at 11:25 am

Was in KFC for lunch on Friday, had my routine food - the snack plate, spicy! Shall leave the burgers in the hands of Burger King. :-)

Their (kentaki) burgers are small and dont have much stuff in it... i mean the cabbage, tomatoes, etc. For burger, kentaki is a no-no to me.

Compared to McD..... they have better burgers.

Another case of what you see is not what you get,I guess better luck next time