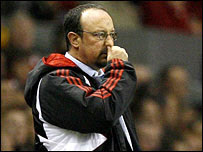 Then the freight train start to sputter. Three drawn matches in a row, with teams we should have kicked right out of the stadium. The manager is back to his tinkering ways of rotating players. Even then I forgive him, for I want to believe he knows what he is doing.

To lose 0-1 to a French team that's currently ranked 17th in France is sheer madness. And we even had home ground advantage. Anfield fans are our twelfth player.

This practice of rotating players just isn't going to work. Players need to play on the same team for long stretches in order to develop good understanding with each other, and thus win matches. Rafa's excuse of rotating players because he is worried his star players will get injured by playing too many matches just doesn't cut it. Hell, when Liverpool last won the Champions League in 2005, they had a lousy season with key players injured most of the time. Rafa is being over protective.

I really hope with this defeat, Rafa will wake up and stop the rotation crap and play his best first-eleven most of the time. I still have hopes for the mighty Reds, but not by much if things are going to go on like this.

It was great when the season kicks, makes me worship benetez for getting one of the best players in the line up.

After awhile, it looks like Liverpool has lost their breath. Gasping for air, trying to keep up. Short sprints and then slow down. They don't win like they used to. The past, they win because they're good and they lost because the opponent deserves it (which we know liverpool should have win, haha).

Benetez has to stop pampering his players or change his style of motivating. Instead of reward them with resting, try motivating them with constant winnings!

He always claim that his rotation policy worked well when he was managing Valencia. That's Spanish soccer for gawd's sake. It is played at half the paste of the EPL! What worked does not mean it will work over in England.

Well, bottom line is, the team is still unbeaten. Benitez is under a lot of pressure to deliver, but with Liverpool's inconsistency, I think Manure will nick it yet again.

Look at them, playing like crap but winning 1-0 several times!

As for Arsenal, I think they're peaking too early.

I was reading newspapers.